Last weekend, I was performing my normal craigslist search of all cars from 1955 to 1971, when a little Rambler convertible caught my eye. The AMC Rambler was one of the smallest, most affordable, and most fuel efficient cars in 1964 and it drew me in with it’s clean design. The original craigslist post only had 4 pictures that were kind of far away, but it looked good enough from a distance to contact the owner. After a flurry of texts back and forth about the condition of the car and where it could be seen, I contacted my friend Rob who I helped drive to pickup his 1966 Ford F100. He was available to drive me to check the car over.

I prepped with a mad flurry of research on the car, including valuation and history. The ’64 Rambler American was the first year for the third generation. It sported a redesigned look courtesy of designer Richard A. Teague. The wheelbase was extended by six inches vs the outgoing model. The car still sported an inline 6 cylinder engine. The car seemed interesting with the research and I was looking forward to checking out the car.

Upon arriving, the car had a great exterior presence. It just exuded a “buy me” vibe. I spoke with the owner around the history of the car. It was originally an Indianapolis car that had gone through an unknown number of owners, but he had owned it for 10 years. He had the original sticker for the car and some supporting documentation. We walked around the car discussing some of the items that did need work. The fuel gauge and temperature gauges didn’t function. The original windshield wipers had stopped functioning and the vacuum powered controller needed rebuilt. The interior was in slightly dated shape with the seats looking like they were last updated in the 70s with fabric. We went for a test drive in the rambler and I got to experience the wind in my hair. The lack of power steering is an interesting driving dynamic vs more modern cars. I really liked the car, but wasn’t in love with it for the price. After some negotiation with the owner, we reached a deal and the car would be mine. 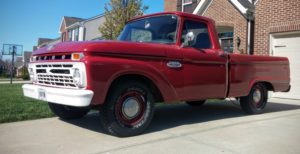 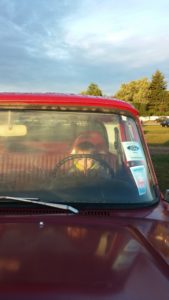 My son behind the wheel of the F100 on the show field.

The Pumpkin Run Nationals is a classic auto show that’s held in Southern Ohio in October every year. 2015 marked the 40th annual show, and it was the first car show I entered my 66 F100 into. Not because I have any hope of winning an award with the truck, but because of the camaraderie of a bunch of like-minded car nuts all gathered in the same place.

The show typically runs Friday-Sunday, and the 2015 show was held the first weekend of October. If you know anything about Ohio weather, you know that could mean anything from frigid cold to blistering heat. For this show, Ohio decided to give us a variety. I attended the show on Saturday with my wife and kids, and experienced cold and wet coat and mitten weather. On Sunday, David and I checked out the show field after church, and sweated in T-shirts, and I came home with a mild sunburn.

The show is open to all makes and models, with the largest segment being the American Big 3: Ford Country, Bowtie Country, and Mopar Country each get their own dedicated space on the show grounds. I parked my truck squarely in the Ford section, but that doesn’t stop me from checking out everything and appreciating what I see from each manufacturer.
I plan to enter the 2016 Pumpkin Run Nationals, which will be held September 30 – October 2.

I only took a few photos but here’s what caught my eye: 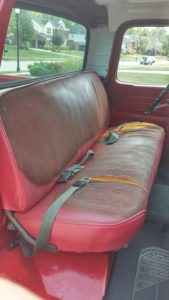 The original seat and belt were in a sorry state

When I first purchased the 1966 F100, David called it the “Meatrocket” owing to the fact that it had a set of 50 year old nonfunctional lap belts, and in a frontal collision the driver would rocket through the windshield like a piece of meat. A 3-point seatbelt retrofit would be just the ticket to increase the safety margin with the stock 4-wheel drum brakes. Due to the sad state of the original bench seat, I also decided a seat upgrade was in order. As an added bonus, choosing a seat with head rests improves the occupant safety in case the truck is rear-ended.

Research on Google indicated that by swapping the seat tracks, I could use any seat up to the 1996 F150. I tracked down a color matched vinyl bench with integrated head rests out of the 1992-1996 generation F150, a $75 Craiglist score.

The seat belts were another matter. I located a site that builds custom seat belts and supplies the necessary retrofit hardware, and purchased a set of retracting 3-point belts with period appearing latch buckles.

Installing the seat was a relatively straightforward process, involving plenty of liquid wrench and colorful language to remove the old seat. Next, the seat tracks are unbolted from both seats, and since the track width is the same, the original track bolts right up to the later model seat. Finally, the new seat on original track bolts straight back into the truck. 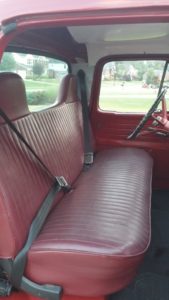 The finished seat and belt upgrade.

The seat belt retrofit required a bit more work. The bottom mount points are already in the truck, but the shoulder mount doesn’t exist. Luckily the inner cab corners are ribbed for extra strength, and serve as a great location to attach the shoulder mount using these retrofit brackets. Each inner cab corner is drilled out, being careful not to dent the outer sheet metal when the drill breaks through, and the brackets can be riveted in place before the shoulder mounts are bolted up. In order to avoid drilling extra holes in my truck, I chose to skip the rivets and simply hold the brackets in place from behind while bolting the seat belt in place.

Mounting the latches in the existing inner bolt locations and the retractors in the outer mount locations completes the seat belt installation, and the finished product is satisfactory indeed.

These two upgrades improve the looks inside the cab, as well as the safety. Now, with luck, my head won’t be going through either window in the event of a crash.

When browsing craiglist for cars recently, a favorite pastime, I came across a truck I knew a friend of mine would love.

A 1966 Ford F100 that claims to be in amazing shape and with an almost unbelievable 60,000 original miles. The truck looks intriguing from the photos and after a quick followup with the owner, Rob and I are heading off to checkout the truck this evening. With any luck the truck will be what it claims and we may have some more content to share around the new truck.

Update: Seeing value in the solid body and bulletproof inline six, Rob purchased the truck with plans for incremental upgrades in the future.

From the Mazda Press Release:

“Lighter, smaller, quicker and more nimble than its predecessor, MX-5 has adopted Mazda’s full suite of SKYACTIV Technology and KODO—Soul of Motion design. In the process, MX-5 has shed approximately 150 pounds from its predecessor, with a curb weight of 2,332 lbs. when equipped with SKYACTIV-MT six-speed manual transmission (2,381 lbs. with the six-speed automatic transmission).

After 26 years and more than 950,000 Mazda MX-5 Miatas sold globally, the 2016 MX-5 has circled back to what made the world fall in love with it in the first place. When the first-generation MX-5 Miata made its world debut at the 1989 Chicago Auto Show, it ushered in a new era of the roadster: fun and affordable, yet with the added benefit of Japanese reliability. And, predictably, its popularity skyrocketed. MX-5s have become daily drivers, weekend toys and championship-winning race cars, alike. Lightweight, nimble and fun to drive, the fourth-generation MX-5 draws inspiration from MX-5s that came before it, pairing the driver as one with the car – in Japanese, it’s loosely translated as “Jinba Ittai.” But it also carves a path that is thoroughly modern and uncharted for Mazda’s flagship roadster. While the purity philosophy behind MX-5 has remained through the years, the 2016 MX-5 has had to adapt, gaining SKYACTIV Technology to make it faster and more efficient and KODO—Soul of Motion design for its striking looks. It is no wonder, then, that MX-5 continues to exist as a class of one, as competitors have come and gone through the years, and it sets the pace for the entire Mazda brand as spirited dynamics and innovation abound throughout the lineup. There has never been a more convincing lineup of cars and SUVs at Mazda than is available today, and every one of them displays a little piece of MX-5 in their value, dynamics and passion.”